""
you are watching: Keep Buying the Dips in Silver in floorballcoach.org

We’ve seen a strong start to Q2 for silver (SLV) market, with the metal easily outperforming the S&P-500 (SPY), as well as the yellow metal. This is a very bullish development given that the strongest periods for precious metals occur when silver is not only outperforming gold but also the S&P-500. In addition, we are now 12 months into a new multi-year breakout for silver, and we are working towards a very similar setup to what we saw in 2005. While history doesn’t repeat itself, it often rhymes, and this would point to silver tripling over the next six years if it were to play out similarly. However, we could have some consolidation left to fill out this pattern based on the past setup. Assuming this plays out, GoGold (GLGDF) could have significantly more upside, which is why I added to my position again recently. Let’s take a closer look below:

The chart above shows the silver price between 1980 to 2010, with the period beginning with a parabolic top in silver, a 10-year bear market, and a 12+ year consolidation period. Once silver finally broke out of this consolidation period, the metal suffered three pullbacks, with each being less violent (~35%, ~23%, and ~8%) while the metal built a 21-month base. This basing period allowed silver’s monthly moving average to play catch-up, with the final pullback landing right on this key moving average. From this breakout from the base-on-base pattern, silver soared more than 400% in less than seven years, finishing its bull market in a parabolic fashion near $50.00/oz.

See also  Is Xerox a Good Turnaround Stock to Buy in 2021?

Currently, we look to be building a similar setup for silver but on a shorter scale, with the metal making a parabolic top in early 2011, suffering a 4+ year bear market, and then consolidating for five years in a wide and loose range. This setup is actually more constructive than the last one, as silver made its final low right before the breakout during the COVID-19 Crash, shaking out many weak hands from the trade.

As it stands currently, we are 12 months into the base-on-base pattern, have suffered two sharp corrections (with each being less violent), and the monthly moving average (teal line) is playing catch-up. If this were to play out similarly, we would see a final pullback of less than 10% and then a breakout from this base before Q1 of next year. 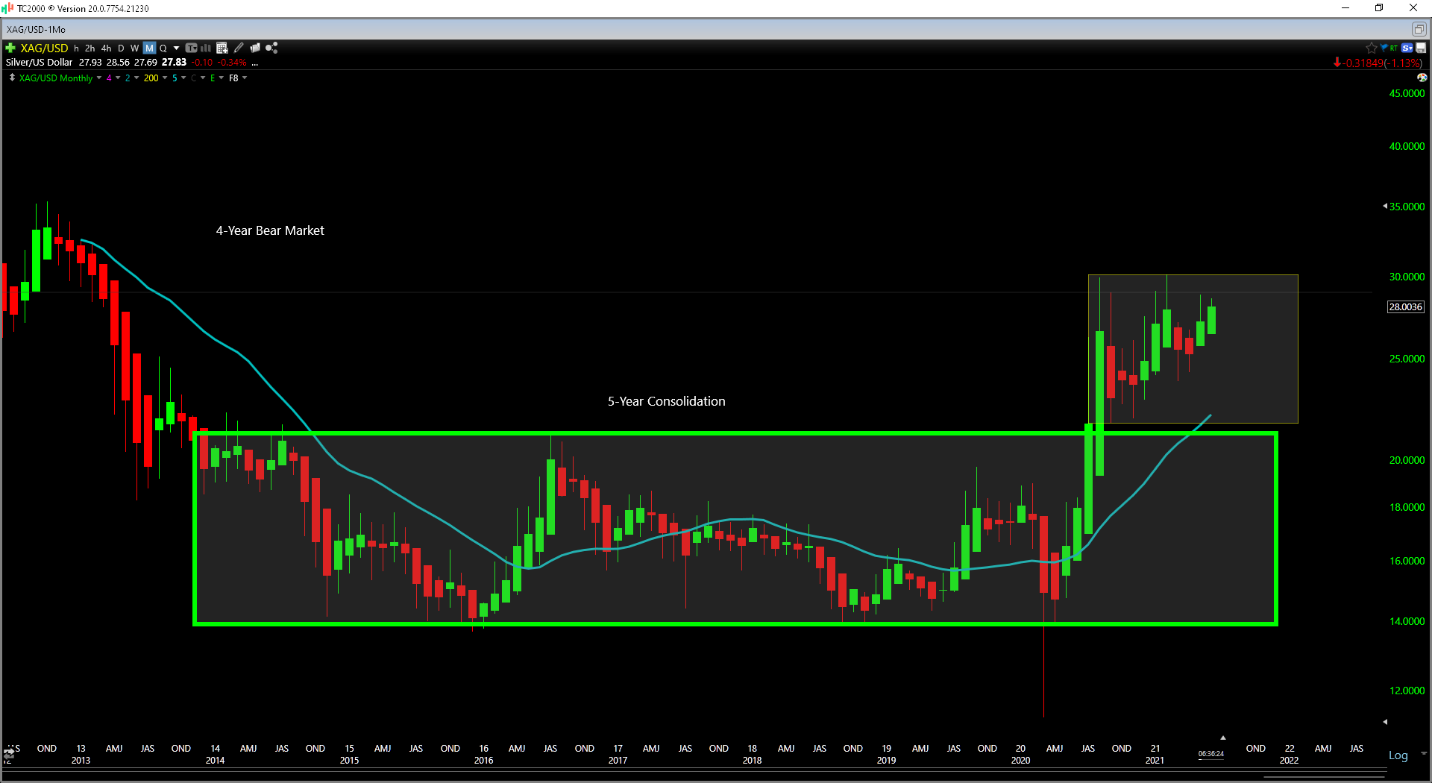 Obviously, patterns are not perfect and don’t repeat themselves perfectly, and some even fail miserably. However, multi-year breakouts are generally very bullish, and the current base-on-base pattern remains quite constructive. Therefore, similar to gold which found strong support at its monthly moving average, it’s possible that silver could continue to trade sideways here in a frustrating range or suffer one final correction and allow the monthly moving average to play catch-up. Assuming this is the case, any dips to the $23.50 – $24.50/oz level should be low-risk buying opportunities, which is where the monthly moving average will come in by the beginning of August.

Given the multi-year breakout we have here in silver and constructive action following the breakout, I don’t see any reason to get hung up on the day-to-day or even week-to-week action, similar to the correction that we saw in gold towards the March low. While this volatile action was frustrating, it inflicted no damage on the bigger picture, with the bigger picture being a re-test of a key breakout level. As long as the $22.00/oz level is defended, silver will remain bullish on its dominant time-frames (monthly & quarterly), and if it plays out similarly, we could see a move above $40.00/oz in the next 18 months, assuming a breakout from this base-on-base pattern before Q1 2022.

See also  Is Covanta a Good Green Energy Stock to Own?

For this reason, I’ll be looking to buy the dips in the best silver miners, but I am not in a rush to add any here, given that many are extended short-term. I continue to see one of the best ways to play the sector as GoGold Resources, given that it’s arguably a top-5 takeover target in the space with 20%+ insider ownership.

Disclosure: I am long GLD, GLGDF

Disclaimer: Taylor Dart is not a Registered Investment Advisor or Financial Planner. This writing is for informational purposes only. It does not constitute an offer to sell, a solicitation to buy, or a recommendation regarding any securities transaction. The information contained in this writing should not be construed as financial or investment advice on any subject matter. Taylor Dart expressly disclaims all liability in respect to actions taken based on any or all of the information on this writing.

About the Author: Taylor Dart

Taylor has over a decade of investing experience, with a special focus on the precious metals sector. In addition to working with ETFDailyNews, he is a prominent writer on Seeking Alpha. Learn more about Taylor’s background, along with links to his most recent articles. More…